Letter to my mother

Last Sunday was like any other Sunday. A normal family Sunday. My extended family sharing a meal  and some talk. 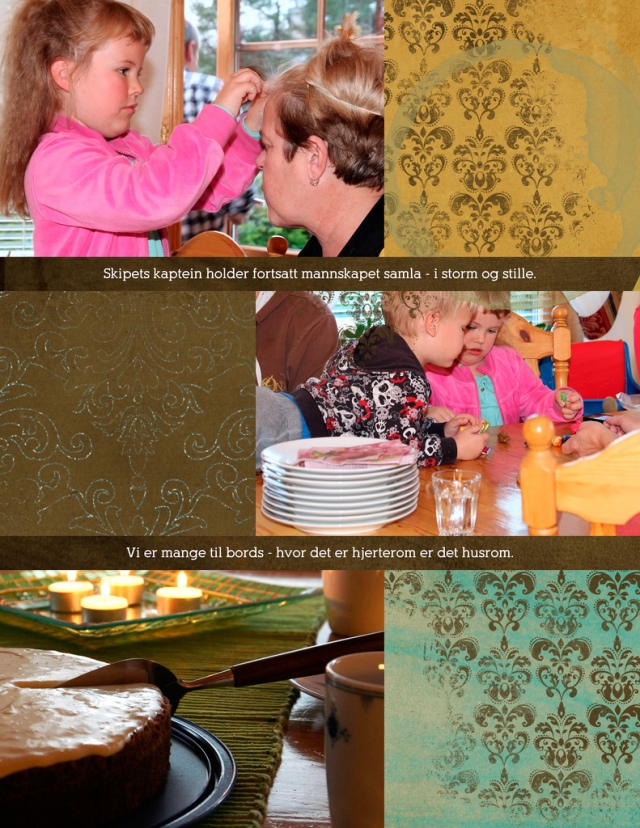 Three generations. Enjoying our time together.

We missed someone. The fourth generation – my mother, who should had been there.

For you – everything came together in the summer of 2004 when Linda and Jan could tell that you were going to be great-grandmother. You were 72 years old and you had everything you ever wanted – you would be great-grandmother. As the pessimist you could be you was sure you wouldn`t be alive in April the following year. The optimist in you thought you would be a great-grandmother in the same way as you were a grandmother. Always present.
We lost you so suddenly – Palm Sunday.  March 29 2005, your 73 birthday, we escorted you to your final rest. Sorrow and happiness go hand in hand. Two weeks later, a Wednesday in April, your first great-grandchild was born – a beautiful girl, a great-grandchild you already loved.

Little did you know they would come out like pearls on a string? Two years later – a Friday evening in February, a little boy was born. And this time, your lap would have been big enough for two. Four years after you surrendered the seat at the end of the table to the next generation a second boy came to us on a Friday evening in May.
I choose to believe that you see us this Sunday in October 2010. I think you’re surprised to see where we are gathered. I do not think you are surprised over who is present. I think you’re impressed with your daughter in law. A daughter in law who has even baked cake! I think you are very surprised that there are three great-grandchildren present. You remember that? You were not quite convinced that the young ones would manage the transition to parenthood 🙂
In many ways, life goes on as before. The only difference is the man standing at the helm. It is on days like this, we miss you most.
That did not surprise you!
Bud 28 October 2010

7 Responses to Letter to my mother